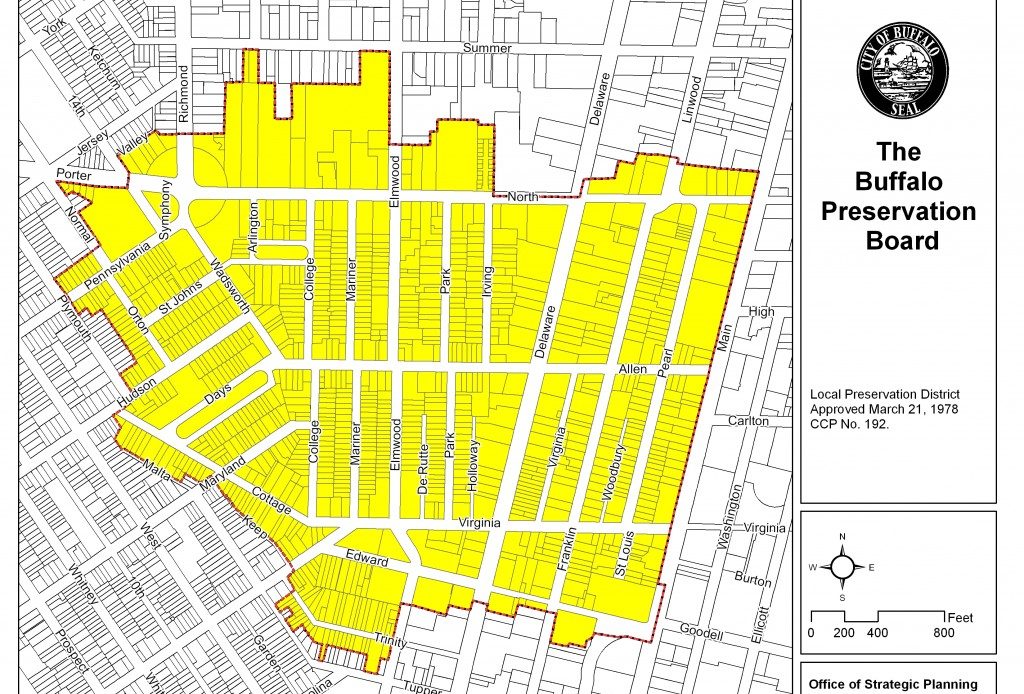 Perhaps Allentown’s most charming address, this is the street where Frederick Law Olmsted lived while he built Buffalo’s park system. He attracted architects to live here, each creating his own elaborate designs in trying to outdo the others. As a result, every house on this street is unique. The homes are built around a common green, today known as Arlington Park.

At No. 60 is one of the most unlikely and wonderful residences in the city, looking like a storybook gingerbread cottage. This two-story Gothic Revival was built in the 1850s of board-and-batten construction, and is believed to be the last remaining home in Buffalo using this construction method. Windows are crowned by label-moulded brows beneath a steeply pitched gable roof. In the 1880s a porch was added, and what a porch it is! A string-moulded vergeboard drips like rich icing from the eaves of the roof. A modillion-bracketed pediment incorporates an elaborate cutout of twelve-spoke mandellas flying over a pattern-spool frieze interrupted by cutout panels in an Old German motif. Elaborately turned spindle posts are bracketed to the porch roof by jigsaw-cut brackets in a complex foliate design.

In stark contrast, No. 15 illustrates crisp, modern design as the only Dutch Colonial in Allentown. It is one of the newer homes in the neighborhood, built in 1898 with an expansive addition added in 1919. It was extensively renovated in 1987 by Mary Hamlin Goodwin, who died in 1996, leaving as her life’s legacy 23 rehabilitated houses in Buffalo and in Santa Fe, NM. Unseen from the street is a wonderful enclosed garden with first- and second-story decks.

This street got its name from a failed attempt in the 1830s to form a University of Western New York, the campus of which would have covered substantially all of Allentown. South of Allen Street, College Street was settled early and modestly. North of Allen, the homes are larger and more elaborate.

At No. 136 stands one of the most starkly beautiful houses in Buffalo, a Gothic Revival cottage built in 1878. The pitch of its gable is cathedral steep. The clapboard facade is broken by a flat-roofed bay lit by three gothic-arched windows. Centered overhead is a paired-lancet window, framed and pedimented, marked by a trefoil light in the tympanum.

This street was once the boundary between the Village of Buffalo and the Village of Black Rock, which was incorporated into the growing City of Buffalo well over 100 years ago. The street once exemplified its name, a sleepy suburban lane dotted with bright worker’s cottages and austere two-story Italianate houses with spare stoop entrances. Many still survive.

But at No. 49 is a fantastic Second Empire mansion built in 1869 by Englishman Thomas Coatsworth, who made his first fortune selling coal to lakes steamers, and his second fortune shipping iron ore and grain on the Great Lakes. The octagonal tower at the corner of the house rises four stories and is crested with decorative cast iron. Notable are the stone window caps and stone corner quoins with carved Eastlake detailing. Above the front door carved in stone is the Neville coat of arms, under which the Coatsworth family served in the War of the Roses, the English civil war.

This is named after Thomas Day, who arrived in Buffalo in the 1820s and operated Buffalo’s first brick kiln. He donated the park to the city in 1854 (Frederick Olmsted designed the park in 1887) and built the first two houses around it for his sons. Both these houses, Nos. 25 and 33, were constructed of his own brick and still stand. Most of the houses on this street — No. 39 is a good example — have been renovated in recent years. The park itself has also been refurbished, including installation of a new fountain, which closely resembles Olmsted is original.

The major residential address on this street is St. Mary’s Square Condominiums at No. 125 at the corner of Elmwood Avenue. This structure was built 165 years ago as St. Mary’s School for Deaf. Later it became housing, but fell into sad disrepair and was a candidate for demolition in 1982. The Allentown Association spearheaded a successful effort to renovate it into a graceful condo complex.

Home to some of Allentown’s wealthiest residents, this was dedicated in 1855 as Bowery Street, indicating a place where trees bowered overhead, but was changed to commemorate Washington Irving. On a street of truly exceptional homes, consider No. 59, a Queen Anne with Tudor styling supporting a hipped roof, built in 1882. The entrance is bracketed by fluted pilasters crowned by pedimented entablatures. Two rusticated round arches featuring terra cotta decorative relief highlight the ground floor. There are three second-story oriels on the facade, accented by paired windows, stick styling and steeply gabled wall dormers above. Ornate bargeboards and diamond-tracery windows grace the dormers.

No. 29 Irving is a simple Italianate residence, built in 1870. It is distinguished by by a pedimented entrance portico. F. Scott Fitzgerald’s early childhood was was spent in this house, after his father took a job as a salesman for Proctor and Gamble in 1903.

At No. 63 Irving is a Shingle style, rare in Allentown. The structure has a chimney stack with decorated terra cotta chimney pots in the fishscale shingled front gable, which hovers over 16-light windows surrounded by raked moulding.

A lovely middle-class street characterized by austere 2-story Italianate houses interspersed with carpenter cottages and the occasional Colonial, Federal or Georgian astonishment. Consider No. 109, an immense 1898 Colonial Revival structure. The second-story bay windows are crowned by pediments of broken-scroll design characteristic of Colonial-era chests. The gabled roof is protected by a bargeboard finished at each terminus with floral designs. Three massive brackets carved as reliefs of a bearded, patriarchal face are unlike anything else in the neighborhood.

Off North Street across from Irving Place is a private two-level street known as Mayfair Lane. These are Buffalo’s first condominiums, built in 1928 by the E.B. Green and Son; No. 21 was the residence of E.B. green, Jr. The lower level accommodates vehicle access; the upper level is a slate lane reminiscent of an English village. At the end of the lane, at the entrance to No. 21, stands a Tudor tower and a chained drawbridge overhung by a parapeted and gated medieval arch, all marked by post-gothic embellishments such as crests, quatrefoil lights and lions as grotesques.

Homes on this street were built for Buffalo’s 19th century upwardly mobile sophisticates, and they reflect their builders’ post-Civil War prosperity. They are conservative examples of period styles, built in brick and stone. The well-to-do young people who built these homes could afford ornament, and nearly every house on the street wears elegant and often unusual architectural jewelry.

At No. 17 a remodeling that removed an Eastlake porch actually restored the French antecedents of its Second Empire Style and exposed the wonderful round-arched second-story windows to clear view.

No. 48, built in 1866, features flat-headed windows and a low-slung gabled roof supported by paired brackets for a classic Italianate form. Hooded, round-arched dormers supported by delicate pilasters segment the slate-shingled Mansard roof of No. 70. The first floor is beautifully lit by narrow segmentally arched windows behind iron balconets and a seven-light arched transom over the side-lighted door. The little three-story apartment building at No. 85 was built in 1920, reflecting the enchantment with France that Doughboys brought back from the Great War. It re-creates in America a bit of the timeless grace and beauty of Paris. It has a front-facing Mansard cap. A stone belt course separates the third floor, over which rectangular four-over-four-light windows have been set and headed by a continuous stone lintel. The second and third stories are centered by eight-light French doors which debouch onto cast-iron balconies. First- and second-story lintels are centered on a keystone. The entry is surmounted by a molded hood supported on corbel stops and covering a round-arched transom.

Nos. 172-182 are unlike anything else in Buffalo, adjoining Romanesque structures built in 1888 as tenements by architect Fred Fischer. They followed a downward path until 1972, when architect E. Bruce Garver rescued them and turned them into tony townhouses. The three-story structures are nearly identical, with flat roofs and first-floor facades each consumed by a semi-elliptical arch which is accented with delicate cast-iron traceries. Three-sided bays of copper on wood overhang the entry arch and have alternating pyramidic and round caps. Corner pilasters divide each unit, and corbel panels under the frieze provide an ornamental note to the otherwise austere facades.

A street of heady imagination, of great and little treasures. The house at No. 156 was inspired by the 20th century Craftsman school. Built by Charles Rohlfs, one of Elbert Hubbard’s world-renowned Roycrofters, the 2AB-story stucco house rests under a broad-gabled roof housing four flatheaded multilight windows separated by hand-carved sticks extending from beneath the sills upward to the eaves. At the entrance, a vertical plank door with a lion’s head knocker is secured by huge, handmade hinges and flanked by leaded sidelights. The Queen Anne at No. 167 has a gabled roof supported by a vergeboard decorated in pinwheel motif. A roof-to-fountain bay dominates the facade and is intricately Stick detailed, making it unique in Allentown.

This truncated little lane was once home to Buffalo’s first high school, the Literary and Scientific Academy, built in 1829. The school later became a Sisters of Charity Hospital. The structure still stands as Nos. 14, 18 and 20, transformed into row-house apartments.

On the odd-numbered side of the street are four charming cottages built in Second Empire style heavily imposed with Queen Anne elements. There once were seven, but unfortunately three were demolished for parking, the disease of historic districts nationwide.

This utterly charming, dog-legged narrow lane is hardly noticed by the thousands of drivers who speed past its entrance on busy South Elmwood Avenue. Yet it holds enchanting treasures, small beautiful houses interspersed with major surprises, fronted by narrow sidewalks illuminated by Victorian-style light standards.

At Nos. 56 and 58 stand two vertical townhouses of a type that were popular in other cities to take advantage of narrow lots, but which never caught on in Buffalo where land was abundant. They are unique in Buffalo as a result. The Italianate No. 56 was built in 1869, and its Second Empire neighbor was built a year later.

Among the remarkable structures on this street is No. 414, commonly known as Coit House, the oldest house in Buffalo. George Coit, a pharmacist, moved to Buffalo in 1811 and saw the village burned to the ground by the British on Dec. 30, 1813, during the War of 1812. In the reconstruction that followed, he built Coit house at the corner of Pearl and Swan streets. It is a three-story Federal-style residence with a side-ending gable roof. In the post-Civil War boom, houses were in the way of commercial progress downtown, and many were demolished. Coit house, however, was dissembled, moved, and reconstructed on its current site. By 1966 the house had fallen into utter disrepair and was slated for demolition. The Landmark Society of the Niagara Frontier was formed to save it, and found a private owner, Henry Priebe, to restore it. Recently it suffered some water damage and another renovation effort is planned.

The northwestern section of Allentown, including Pennsylvania Street, Hudson Street, Orton Place and St. John’s Place were originally part of the Village of Black Rock and were not intensively settled until the late 1880s. Many of the homes in this section have been renovated, but many are in need of it.

Distinctive structures include No. 8 St. John’s, displaying unusual pebble relief in its Stick-detailed gable end under a sleek bargeboard. The window frame in the second-story bay features a flowered design. An unusual grotesque stares down from the porch pediment.

Complimenting each other are the Second Empire cottages at Nos. 355 and 357 Pennsylvania. At No. 357 a two-story polygonal pavilion is shingled around the entire second floor and interrupted by pedimented dormers marked by cutout patterns in the tympanums and supported by pilasters. Its distinctive combination of Mansard and hip-roof lines set it apart.